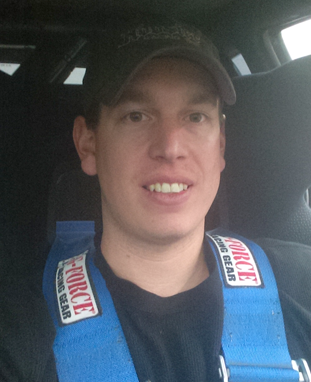 From: Carlisle, PA
Runs: Bryan is currently running in Rallycross events. When not running in events, he is on the crew for several stage rally and road racing teams. Bryan is working towards getting into the autocross and road racing scene within the next season or two.
Drives: Currently Bryan is running a 2000 Subaru Impreza 2.5RS in PA class.
Member since: 2015

Bryan first began tinkering with cars at age 12 while helping his grandfather restore his 1941 Plymouth convertible. Bryan is now the proud owner this vehicle. Working with his grandfather fueled a love affair with all things vintage muscle. Bryan has several car projects that are in various stages of completion.

In 2008 Bryan met his now wife. Her father races vintage sports. In 2000 Bryan began working in the crew for his father-in-law. This really began to peak Bryan’s interest in all things motorsports. In October of 2013, with no competitive vehicles of his own, Adam Moore offered Bryan the chance to co-drive his rallycross car at the last Susquehanna SCCA Rallycross event of that season. After one event he was hooked. By the start of the 2014 Rallycross season Bryan owned not 1 but 2 Subarus. Bryan has ran almost every Rallycross event with both the Susquehanna and DC Chapters of SCCA since 2014.

When the racing season is over Bryan spends most of his time either working on a number of different car projects or just spending quality time outdoors with his family.

Bryan was very recently elected to a 3 year term as a Director for the Susquehanna SCCA. Coming from the Rallycross side of our chapter we are all looking forward to great things Bryan will be bringing to the table.