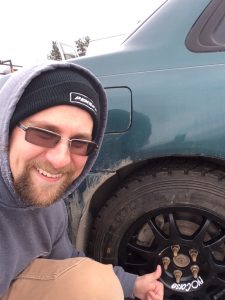 If you have attended any Susquehanna RallyCross event in the last few years you are sure to have run into our RallyCross Chairperson, John Roscinski. John’s interest in all things RallyCross started with his very first event, which coincidentally happens to be Susquehanna SCCA first RX as well, in 2005. He followed that 1 event season with another one-off event in 2006. After a short break he picked up RX again full time in the 2009 season. Since there were no RX events close to home he would travel down to the WDC region.

After a few years of traveling down to The Rally Farm he decided he would start looking into the possibility of a RallyCross closer to home. In 2012 he approached the Susquehanna leadership team to see if they would be willing to restart the RX program. He used all his persuasion and charm to convince them this dirty sport was worth the effort.

All his efforts paid off. Susquehanna SCCA started off with 1 RX event in 2012. With John leading the charge we have just completed our 16th event. John now gets to co drive Adam Moore’s 1996 Subaru Impreza, lovingly named “The Turd” a lot closer to home. We couldn’t be prouder of all his efforts in making the RX seasons successful. We look forward to seeing what John and “The Turd” have in store for the years to come!