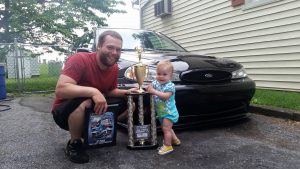 If you have driven in any of our AX Events I am sure you have seen Mark in Tech or spoken to him during the events. Mark is always willing to lend a helping hand or provided any type of informational assistance he can. His knowledge of all things vehicular vast and impressive. When asked what led him to the world AutoCross this is what he had to say:

My dad had always been a car guy, and I guess it got handed down to me. I always enjoyed working on and modifying cars. I was actually a bit of a car show nut. I stumbled across my first autocross event at Park City back around 05 and 06 when I was in high school. I always thought it looked like fun, but never had the guts to go out and give it a shot.

A few years passed, and in that time, I watched numerous other events all while attending car shows. I picked up my SVT Contour back in 2012 and decided I wanted to build it to be an autocross car. With not being very familiar with the program, I didn’t realize there were stock classes (which is where I should have started). After I had the car set up the way I wanted, I finally gave in and gave the autocross at the Carlisle All Ford Nationals a shot back in 2014. I was hooked.

I jumped online and found the next local event, which was in June 2014, at the Giant center with the Susquehanna Region. I remember being super nervous, but I forced myself to go. Being a shy person, this really made me step way out of my comfort zone. It was at that event that I realized I had been going about enjoying my car all wrong. Everyone at the event that I encountered was willing to help me out in whatever way possible, and I wasn’t used that from being involved in the rest of the car scene. Everyone seemed to respect each other, and help out in whatever way possible.  So that, along with the adrenaline rush is what keeps me coming back for more. I never thought it’d become this addicting. I also owe a huge thanks to my wife for being so supportive. She is always putting up with me talking about what I want to do next, or what I need to fix before the next event. I know it drives her insane sometimes, but she still will come to some events with our daughter to cheer me on.

Since I’ve started, the car has been through a few minor changes, such as: a lightweight flywheel, moderate weight reduction, different wheels and tires, different brake setups, different exhaust setups, and an engine swap. Pretty much anything I can do at the time to help shave a few tenths. It’s not at all the fastest car out there, and probably never will be, but I plan to keep driving it as hard as I can to find both the car’s and my limit.