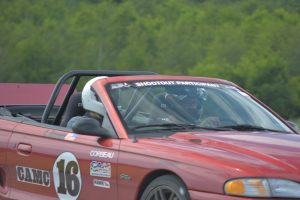 If you ran with us in 2017 you are sure to have seen Chris around the events. When we asked him to talk about this AX experiences he had the following to say:

I started Autocrossing in the summer of 2015. I registered for the morning only at one of the farm show events. Needless to say, after that morning event I was hooked. I ran right up as soon as registration opened for afternoon walk up’s.

Up until that event, I wasn’t really sure what I wanted to do with the car. At that point, I had it for about 2 years and was debating what form of Motorsport I wanted to get into. Thanks to fellow Susquehanna member Mark Hetrick, he convinced me to come out to the event That sold me on the idea of autocross. I made the mistake of modding the car before knowing what my goals were which left me struggling to find a class for the first year. Luckily, I stumbled upon the CAM class and realized that it was the perfect class for an outdated chassis like mine!

I bought the Mustang off my mom soon after I turned 18. She thinks I have ruined her old car, I think I have made it a lot more fun! It started life out with an automatic, but that was destined to be sold to a drag race guy. My first real car project of my own was swapping the transmission on the Mustang. I picked up a T-45 out of a Cobra Mustang from craigslist and swapped it out in the garage.

I have been a car guy my whole life. They say, “A man’s most expensive hobby starts with 97 cents”. If my dad had any idea how true that saying is, he probably wouldn’t have let me have all of his old Hot Wheels when I was a kid! Both of my grandfathers were into cars in different aspects. My grandfather on my Dad’s side had a 62 Imperial Crown Convertible that I was always enamored with and on my Mom’s side there was a 67 Mustang with a 331 stroker and a 64 Galaxie 500.

Thank you for all the memories over the years guys. I am looking forward to the ones we going to make in the future!