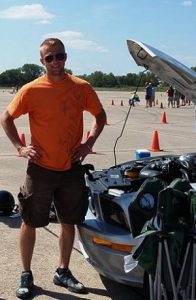 If you attended the 2017 Awards Banquet you are sure to have seen Jason receiving the 3rd place trophy for Prepared/Mod. We got a chance to talk to him about his love affair with all things cars and here is what he had to say:

Ever since I can remember I loved playing with cars. It started with Hot Wheels and Tonka trucks, from there my interest only grew.  I graduated to Power Wheels and bicycles. With that, came the need to push the boundaries.  I started building ramps and acting like a daredevil.  The one instance that comes to mind is me riding my Bigfoot Power Wheels off my grandma’s porch, which was 3-4 feet off the ground.  I believed I was going to make it. However reality hit me when it nosedived then proceeded to roll on top of me.

Cars came later in life and with that a new sense of excitement.  I’ll never forget the one bit of driving advice my mother gave me while I was on my permit, “Brake into the turn and accelerate out” she said.  Years later I found this to be ironically true in autocross.  I’ve always enjoyed the challenge on the driver that autocross brings to the table and because of that, it brings me back again and again.