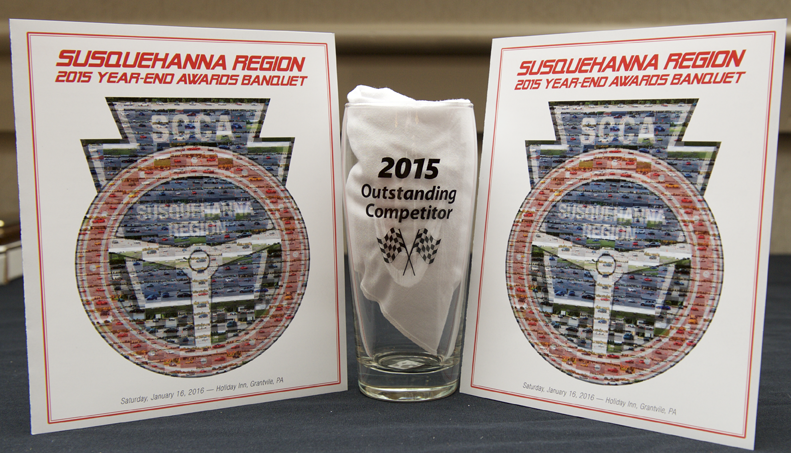 The 2015 Year end banquet was held on January 16th, 2016 at the Holiday Inn of Grantville with 102 people in attendance. Our new club officers were announced and we are happy to welcome Kristen Poole as our new Assistant Region Executive for 2016! Special thanks was given to our very long time Assistant Region Executive, Henry Brillinger, for his many years of dedicated service to the club as well as Anne Demmy for the many years of coordinating our timing for events.

Awards were presented to all of our class winners as well as recognitions to those who helped make 2015 such a successful year for the club. For anyone who was unable to attend the banquet and may have received an award, trophies will be stored in the timing truck and available at the opening autocross event of 2016 (not yet scheduled).

We would like to thank again all of those who made 2015 and our banquet such a success. We are looking forward to an even bigger and better 2016. If you are interested in helping the club with events, please reach out to any of the region officers or come join us at the club meetings every 4th Tuesday at Gilligans on Eisenhower Blvd in Harrisburg.

The Susquehanna Region has several memorial trophies that are awarded to members to recognize their hard work and dedication to the region. Each holds an important part of club history. Read on below for those stories and find out who received each this year.

Awarded to: Tyler Kicera
This trophy was donated by the Ladd Family in memory of Jim Ladd, a long-time Region racer who suffered a fatal accident while competing in the SCCA Runoffs at Riverside, California. It has always been awarded to a regional or national road racer for competition excellence.

Awarded to: Markus Houser
This trophy was awarded the first year as a competition trophy in the Solo program. The E-board expanded its meaning to include not only competition excellence, but work and dedication to the Susquehanna Region’s Solo I, Solo II and Pro Solo programs. Markus was awarded the Solo Cup for his relentless dedication to both the autocross and rallycross programs.

Awarded to: Don Walsh
This trophy was donated by Jim & Alma Hogan in memory of their son, Craig, who was killed in a testing accident at Leguna Seca Raceway one month before he would have participated in his first Indianapolis 500. The trophy is awarded to the individual who best exemplifies Craig’s spirit of sportsmanship and competition excellence in SCCA’s national or regional road race programs.

Awarded to: Ashley Zywusko
This trophy is awarded to the individual who best displays the ideals of service and dedication to all the programs of the Susquehanna Region, SCCA. Translog is a Porsche service and restoration shop located in York, Pennsylvania that was operated by Gary Wigglesworth for more than 32 years. Gary was an active and friendly racing and solo event supporter, participant and sponsor. As Worker Chief, Ashley has ignited the current popular trend of being actively involved in the resurgence of the autocross program.

Awarded to: Dennis Latshaw
This trophy is awarded for a long-term commitment to the Region and honoring her dedication to welcoming and assisting newcomers to Region activities. As our Novice Instructor Chief, Dennis fits this description to a “T.” Lynne DeHart was a long time participant and club official. She was a Regional Executive of the Susquehanna Region, an official of the SCCA North East Division, the Susquehanna Sports Car Club, and the Pennsylvania Hillclimb Association as well as a race corner worker and flagger.