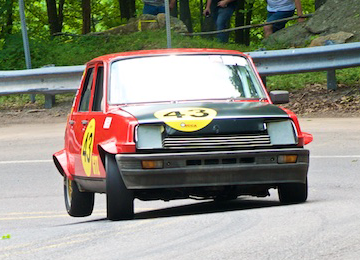 The hill climb there is more than just a race, it’s a full weekend of fun. The town of Weatherly opens up and welcomes the drivers and their families. In many ways, the weekend is like a race and community fair combined. The weekend begins with a Friday evening parade of local cars and race cars that runs through the town. Families are lined up along the street and are often rewarded with candy or tire smoke from the cars. It’s great to see the kids cheering and running around collecting candy.

On Saturday, the food stands by the starting line are in full swing. Many of the local groups operate stands offering food including hamburgers, fries, funnel cakes, pies, and chili. I have done my best to sample all the food that I could and can’t eat enough of the bear chili. The pits seem busier than most other hill climbs with families walking through checking out cars. I enjoyed the kids who would hop from driver seat to driver seat testing out each race car. Many of them had programs and were collecting driver’s signatures.

Saturday morning was a nice crisp fall morning. Rain was in the forecast for Sunday so many drivers pushed hard on Saturday. Kurt Eikenberg ran a 50.792 which ended up being the fastest overall time for the weekend. The dry surface made for some great battles like DSP where Jason Fraley and Vince Wieczorek were battling for the overall class win. Most drivers got three runs and then the day was cut short by a 240 that went off after the jump and broke a telephone pole. The utility workers worked hard into the evening to replace that pole and get the course ready for Sunday morning.

Sunday morning brought the expected rain with drizzling during the drivers meeting. It stopped early on and as the sun came out the track began drying up. Many drivers took advantage of the rain to practice running in the rain and testing different lines. This practice paid off as the track dried in the afternoon and allowed for many drivers to set their fastest times on Sunday. Jason broke Vince’s record and took the class win for the year on Sunday afternoon.

Dennis and Matt Williams and myself battled in BSP and ended the day with only .4 seconds between Dennis in first place and Matt in third place. Ursula Whisler ran her fastest run on Sunday which clinched place in FSP.

To see the full list of how Susquehanna drivers, check out November’s Member Moments. This was a great event to experience and wrap up the hill climb season.